I've called this Coarse Stucco and there are two with slight variations of textures here. I have also included a technique called monoprinting to create layers. I'll come back to this in more detail another time.

Apply texture sand paste to substrate with a palette knife and dab the flat side over it to roughen it up. Leave to dry. I used greyboard and didn't prepare it in any way. 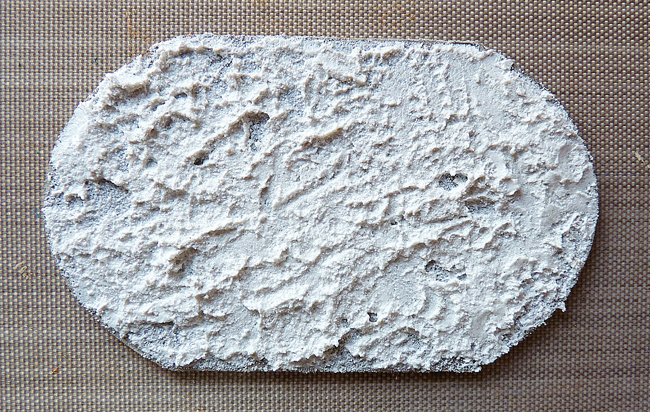 Dabble on three watery washes of  chosen colours, spritz and dry each layer separately until the paint has covered the whole piece. I used hansa yellow light, cerulean blue and viridian. 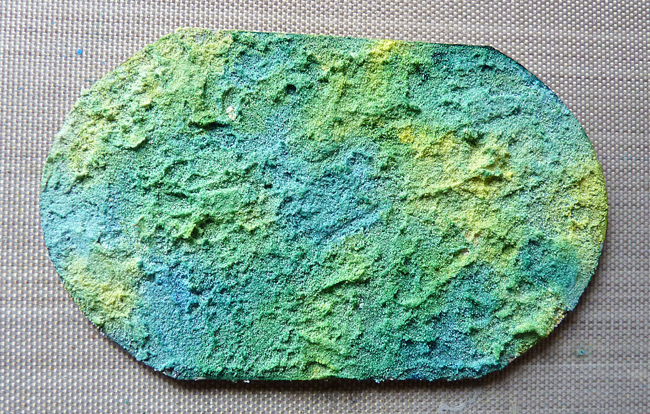 Take a small piece of card and brush paint over it and press onto the surface of the coloured piece. This is called monoprinting.
Monoprint titan buff ... 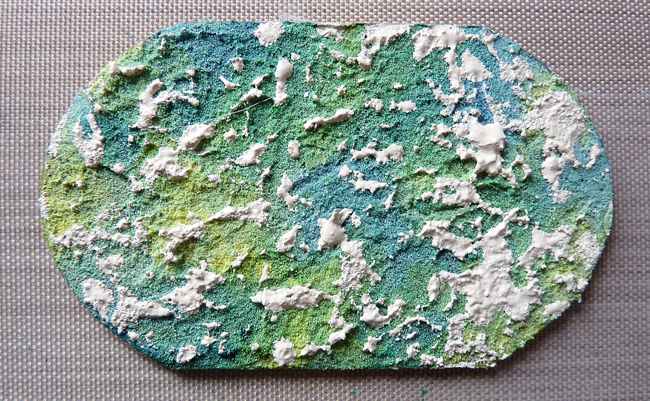 ... and titanium white over the surface. It will stick to the higher points and leave the colour showing through underneath. 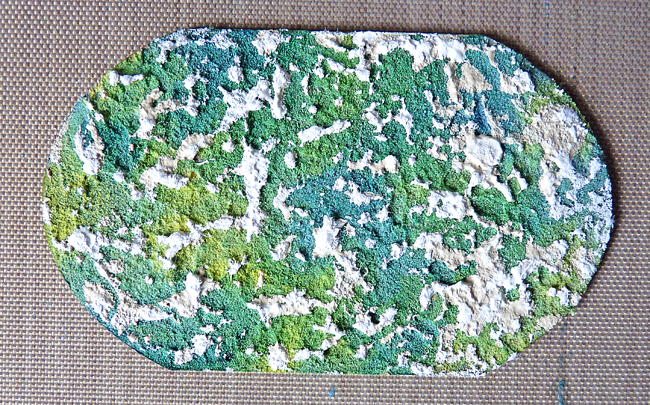 For my second sample I used a piece of card and began by sealing it with a coat of gesso before scraping the texture sand paste over it with a palette knife, just as if I was buttering a slice of bread and then when it was dry I dabbled the paints over again (I used the same colours plus a very little burnt umber to mute them a bit). You can see where the colours have been absorbed more intensely by the paste and the lighter channels of the watery washes inbetween. 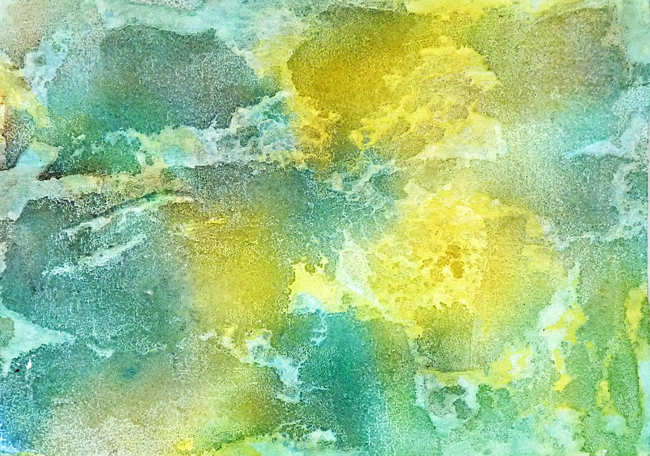 Again I did the monoprinting with titan buff .... 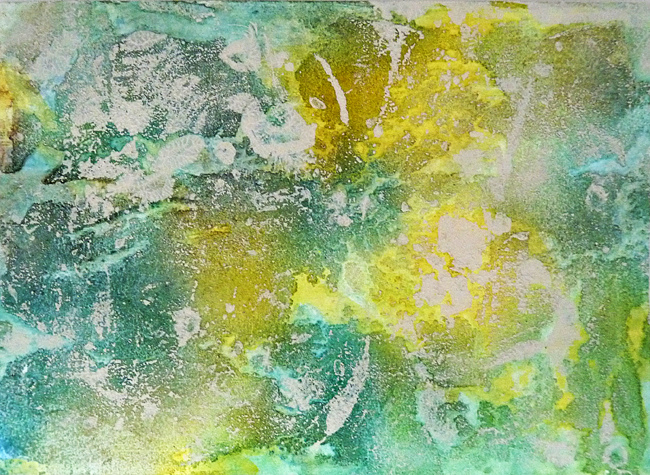 .... and titanium white and got some quite different effects but used almost the same steps. 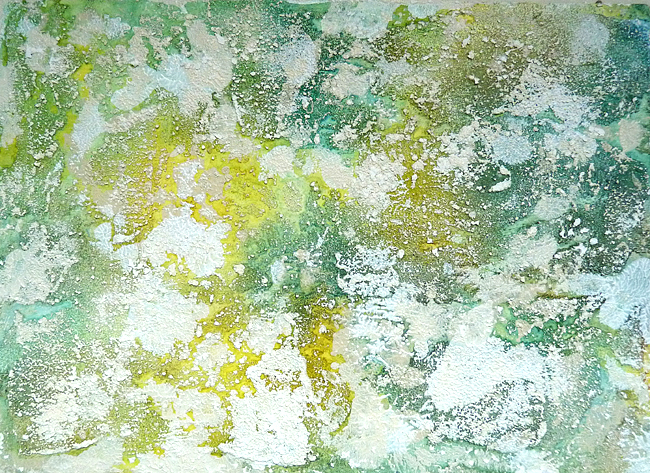 You can see another example here. 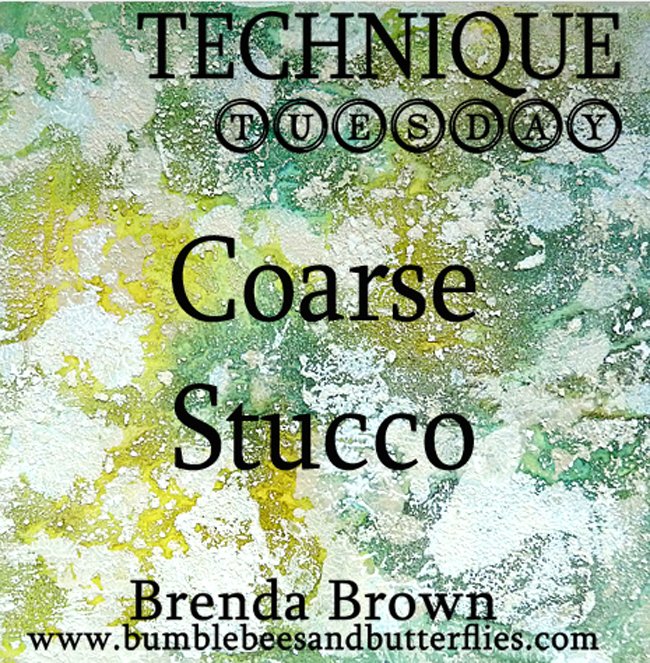 Thanks for popping by again this week and all your lovely comments on the techniques and the graphic for pinning. See you again next week with another technique for you to pop into your library of things to try.

Brilliant Brenda, I'm loving this series, and this is a fab example xx

GREAT TECHNIQUE! Absolutely love it! I'm always inspired by your creativity,so keep it up,and thanks so much.

Wow, absolutely amazing!! The texture is spectacular!! The colors are gorgeous!! I love learning from you!! So inspiring!! Have a great day!! Big hugs :)

Wow fantastic tutorial Brenda and I really do look forward to these every Tuesday ;)
Hugs
Donna xx

Love both samples especially the second one!

Another great Technique Tuesday tutorial - lovely ideas here. If my craft table weren't already groaning under five different things on the go, I'd be off to stucco something!
Alison x

Another great technique uesday post, - such a cool effect, I especially love the second one, a stunning colour combo too!

Oops that was meant to say Tuesday of course, - sorry...

Thank you for the great tutorial, and yes, it's pinned to my tutorials to try folder! Now I'm off to stucco my house! Hug! PS Do you realize how MUCH I appreciate you taking the time to do this???? SO much!

Loving these two techniques and such great colour choices you have used to show them off to their fullest . Thanks for sharing
hugs x

Thanks for sharing these wonderful techniques! Julia xx

Wow that mono printing technique give quite a different effect x

Great technique Brenda, of course I adore texture. Thanks for taking the time to post your step outs each week. Tracy x

Fabulous inspiration. Thank you for sharing this technique (and all your terrific creations past and present) !!

Have to admit, I am a texture piggy! So this is right up my alley! heehee Love what you did with the paste-great technique Brenda!
Jackie xx