It's my turn over on the Andy Skinner blog again today and I am sharing this mixed media board that I made for Stitches in February. It was one of those pieces that was created 'in the moment' and none of the steps got recorded anywhere but I guess I could take a stab at how it came together. 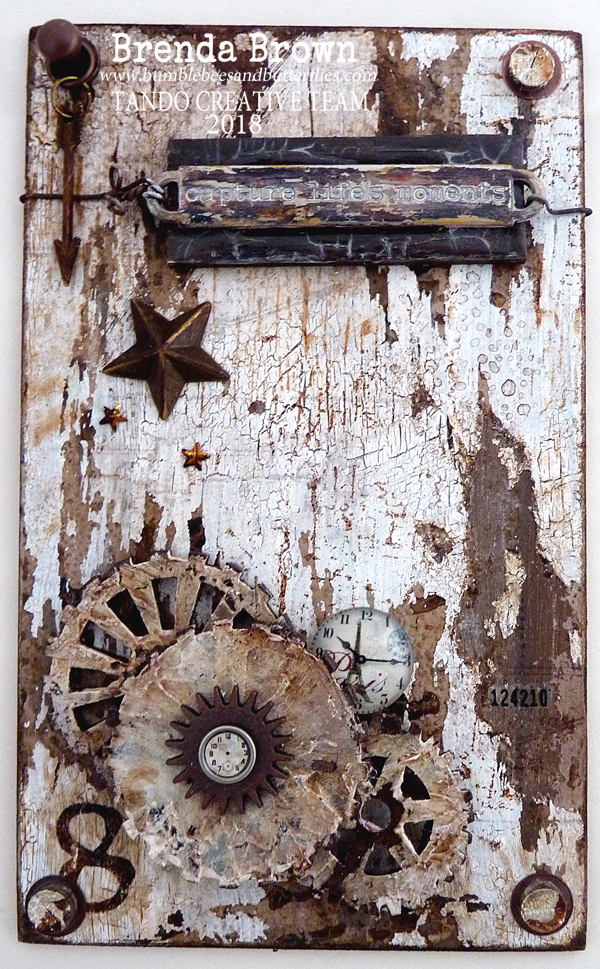 The background is most definitely an example of my weathered wood technique that I love so much and was used  on this faux wood sample I made at the beginning of March. You can check out the tutorial there. It looks as though I probably used DecoArt chalky finish paints and the wax resist certainly worked well on that area where the wood looks as though the paint has peeled back several layers and looks pretty realistic irl. 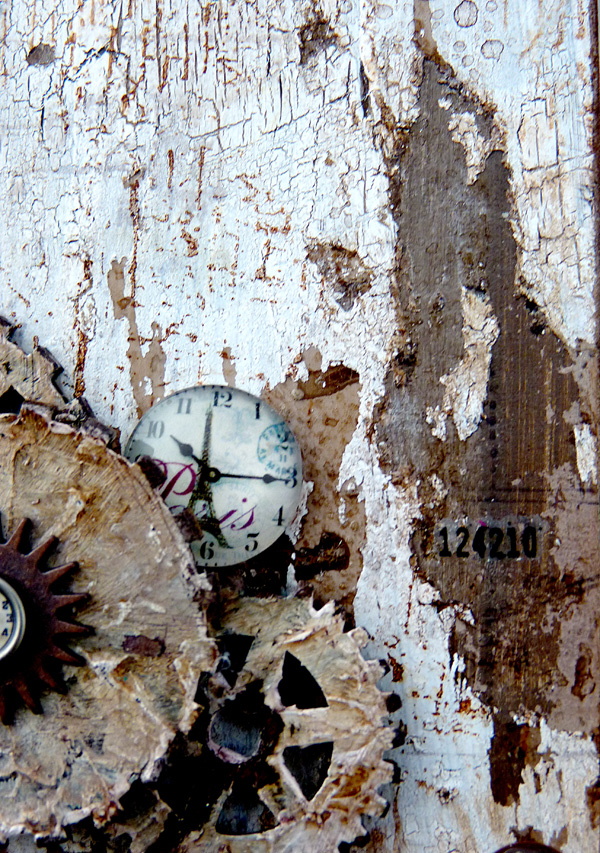 I'm pretty sure the cogs had been give some coats of paint and not finished off so I used either white paint or white gess daubed over them and dipped them into some watery washes before sealing them with a varnish. 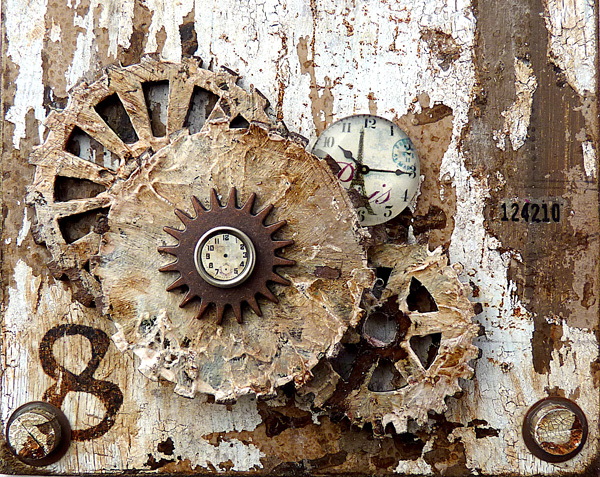 The word band has been given several coats of different browns and rubbed away so that only some of the colour is left and when dry rubbed over again with white paint or white gesso to fill in the alphabet letters and fully rubbed away from the metal. It was mounted over a piece of chipboard given a coat of perhaps raw umber and then a coat of clear crackle glaze which would have been rubbed over and wiped back with white antiquing cream. 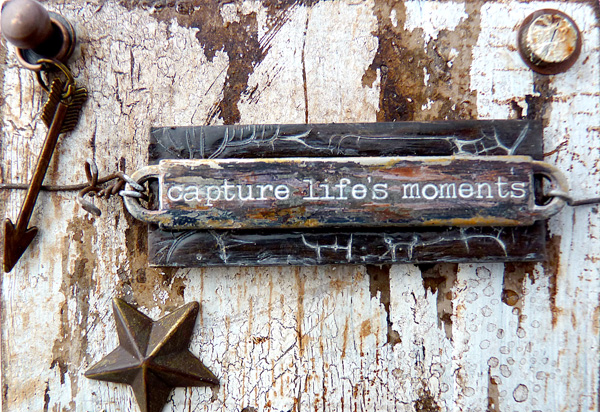 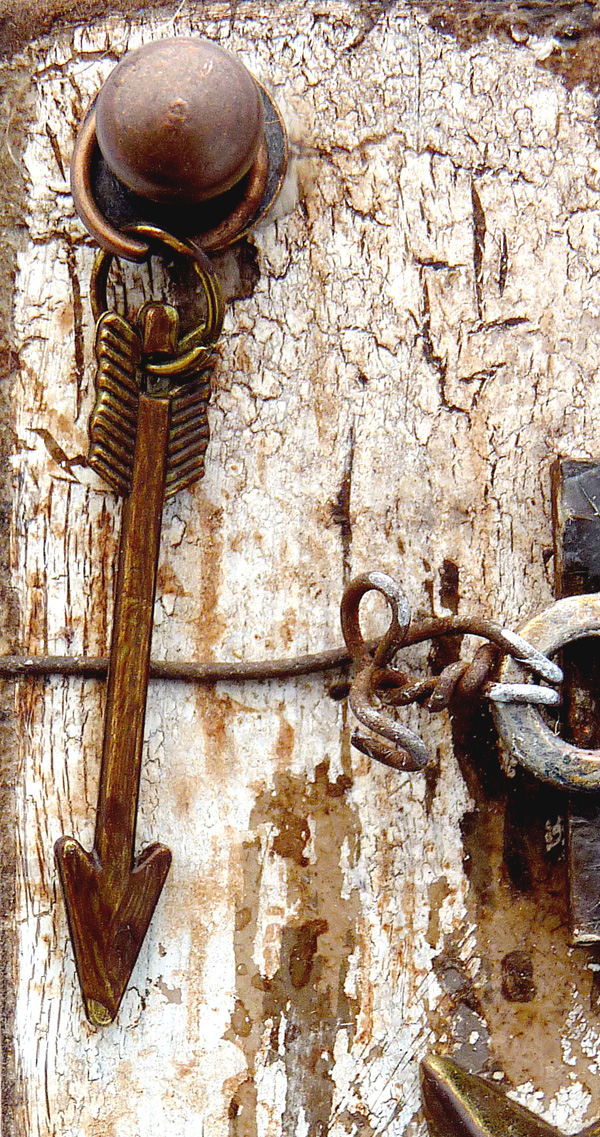 Again just the star had some daubs of paints and rubbed down to look aged and I had found some very tiny stars which I couldn't resist adding. 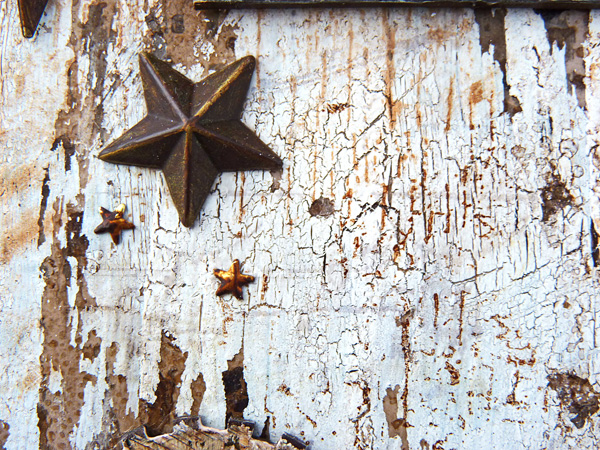 Some faux nuts and bolts, a stamped number 8 and a rub on number with metal cog and clocks finished it off. 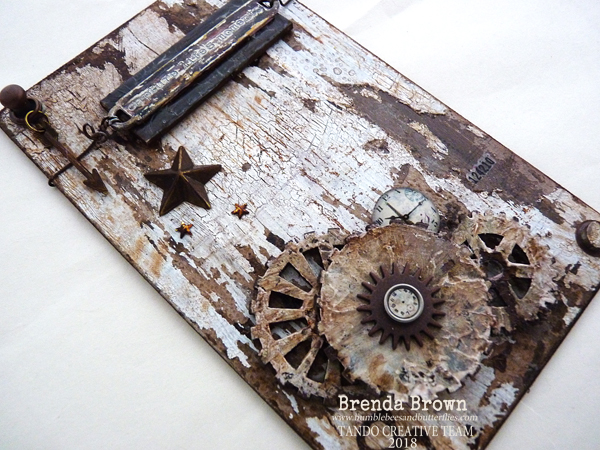 You will read in my post on Andy's blog about how I have been inspired and taught by him over a number of years and everything I have learned has influenced my style and passion for my art today. What is so lovely is that we are all individuals who bring our own style, experiences and ideas to our work and when he asked me to be on his team Andy said he loved my vintage style - so here we have a touch of vintage inspired by the industrial from Andy.