It's a new challenge at Country View Crafts and Corrie is our host looking for all things spooky. I've had a play with Andy Skinner's skull stencil, various other stencils and lots of colour that got grunged up at the end. 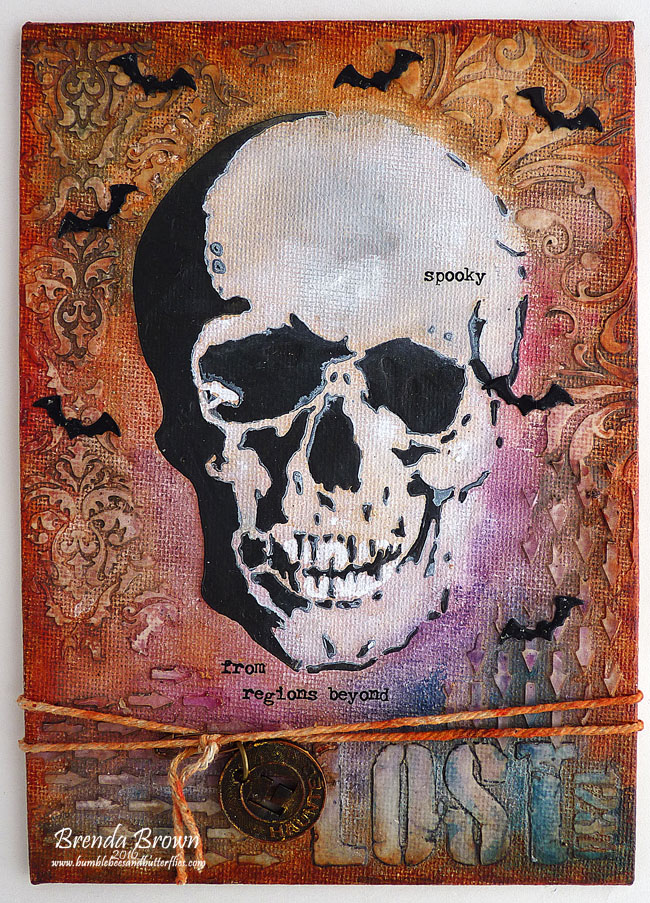 I began with Andy's stencil and applied black modeling paste through it. 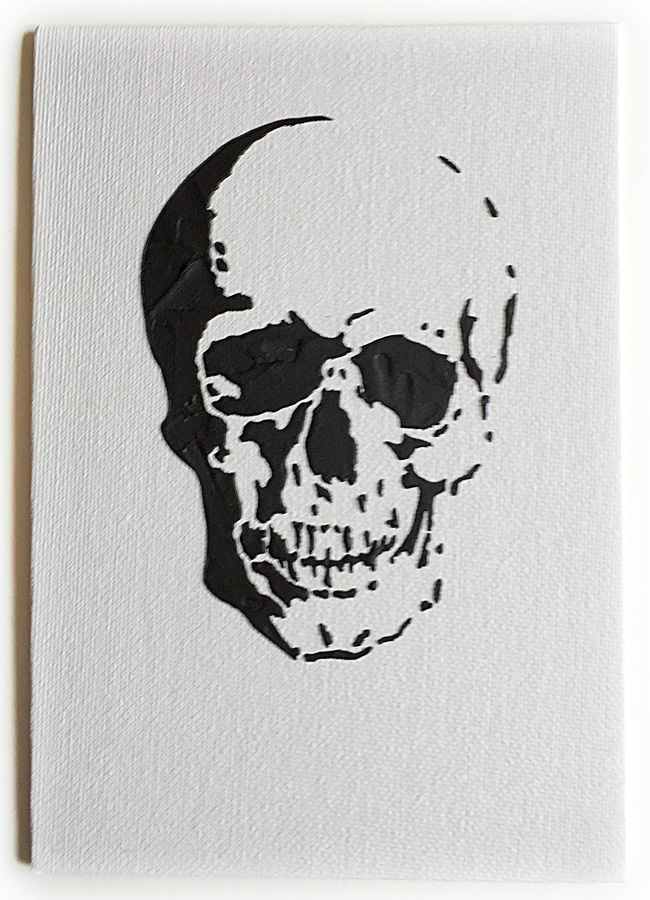 Then I began adding other stencilled textures around the skull. 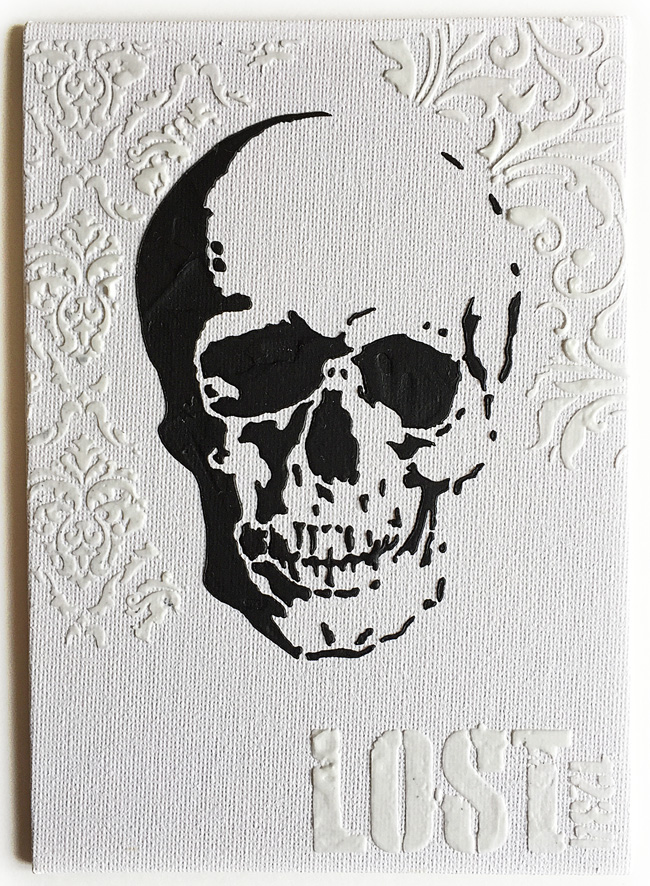 Here you can see the four stencils I used. (Sorry it lost some definition somewhere) 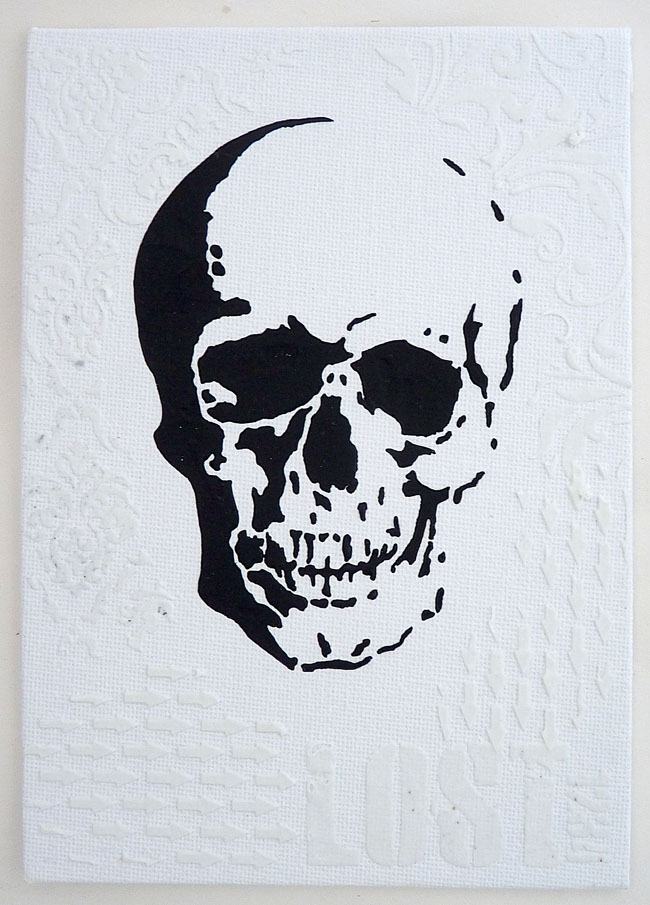 Spritzing with water and blending washes of colour in 'streaks' I put down the base layer. 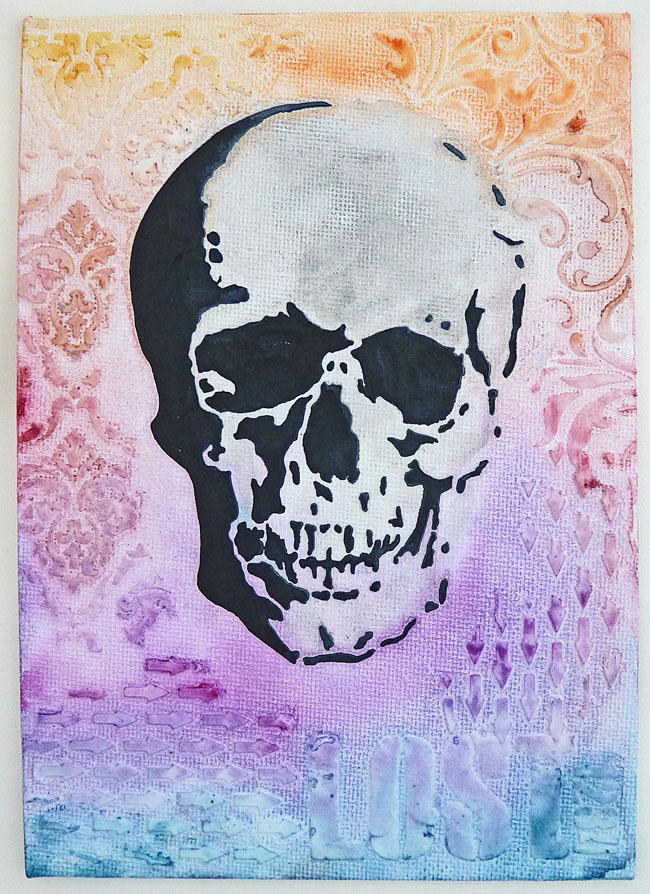 You an see how I use the colours straight and also blend them on the craft mat to get the effects I want. 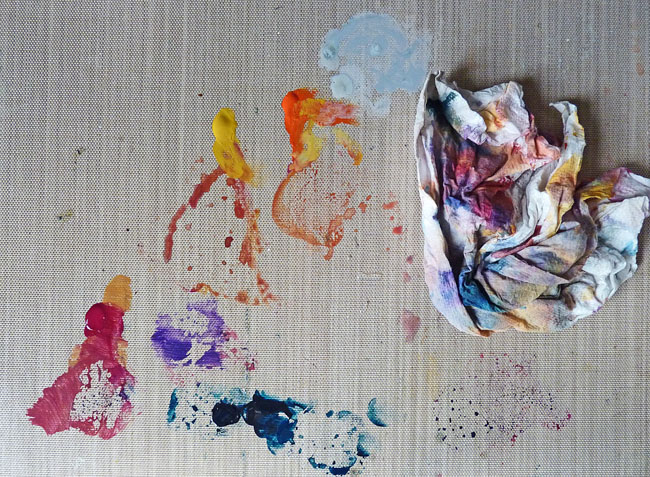 Making sure the board was completely dry I then added some quinacridone gold to the edges, spritzing it with water and letting it run 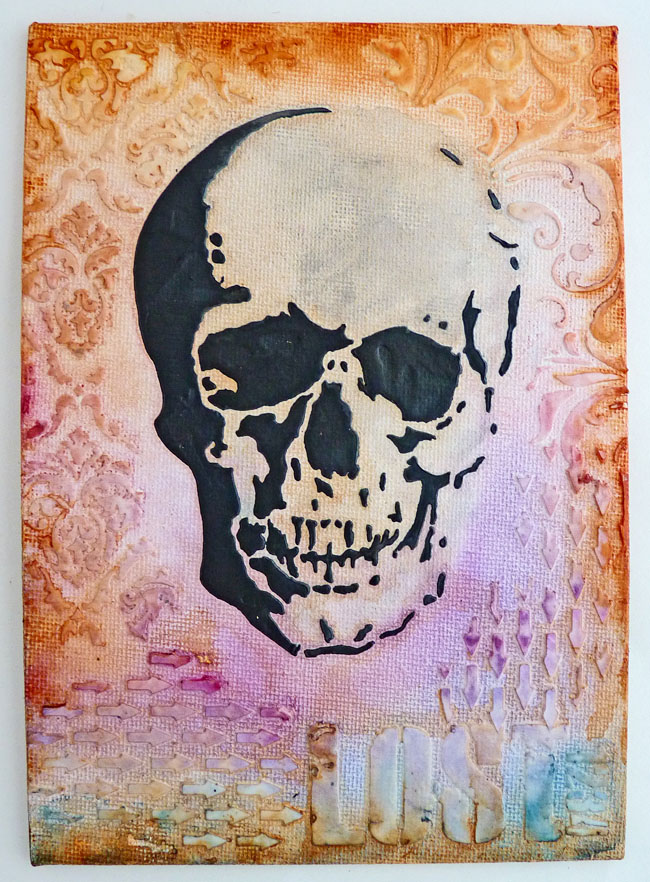 Again having let that dry I mixed the colours into deeper shades and added more layers including the quinacridone around the edges again. 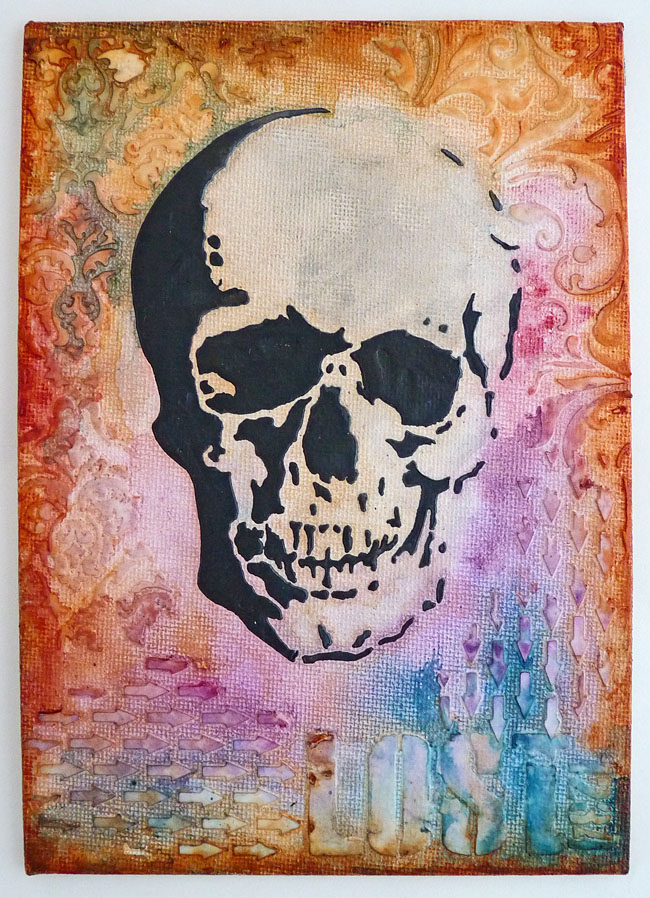 I love mixing he colours I am using to see what shades I get. 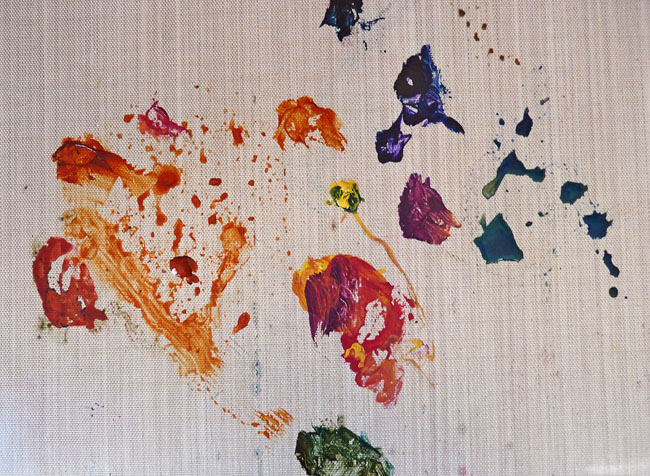 I added just water to the skull area and then dipped a fine paintbrush into titanium white then into the watery area also adding some medium grey. This highlighted the skull making it pop out more. I also coloured the teeth with a white posca pen. 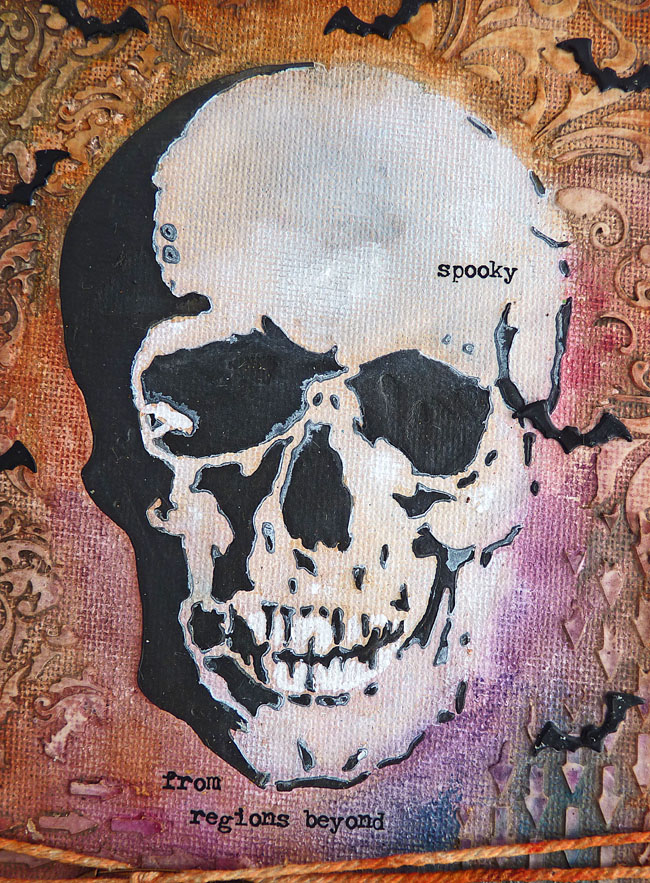 Now to grungy it up by adding raw umber antiquing cream. The photo left below shows it after the antiquing cream had been brushed over and around the edged stencilled textures and on the right after I had let it dry then wiped it over with a damp babywipe to leave the brown in the recesses. 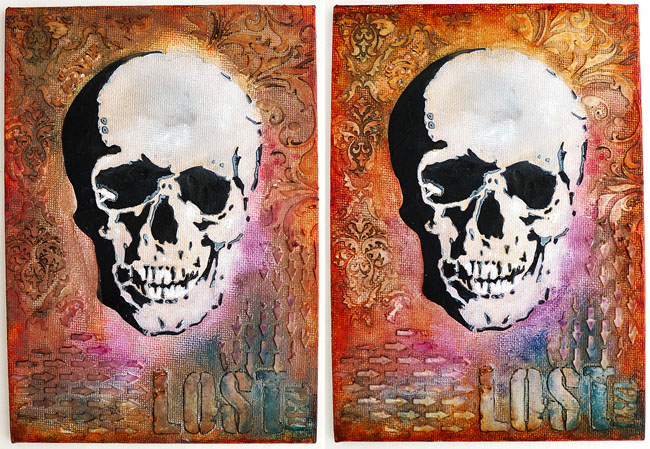 Some bakers twine dipped in the left over paints and a haunted token painted with prussian blue and quinacridone gold before a little orange metallic lustre rubbed and painted over it adds a little embellishment to it. 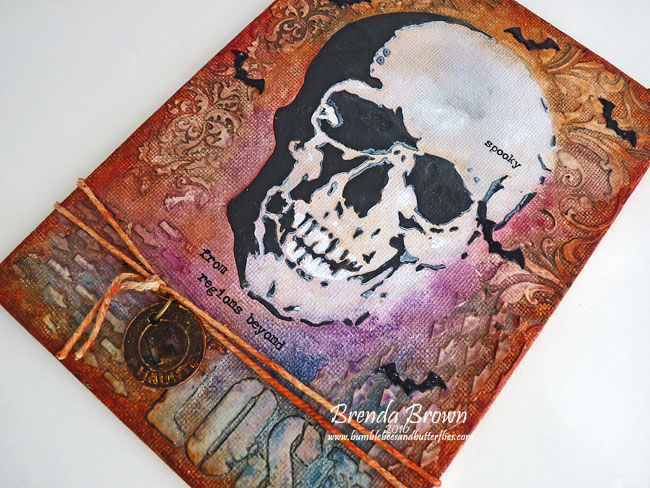 And the bats create a more eerie feel, they were die-cut in shiny black card using the mixed media Halloween thinlits. 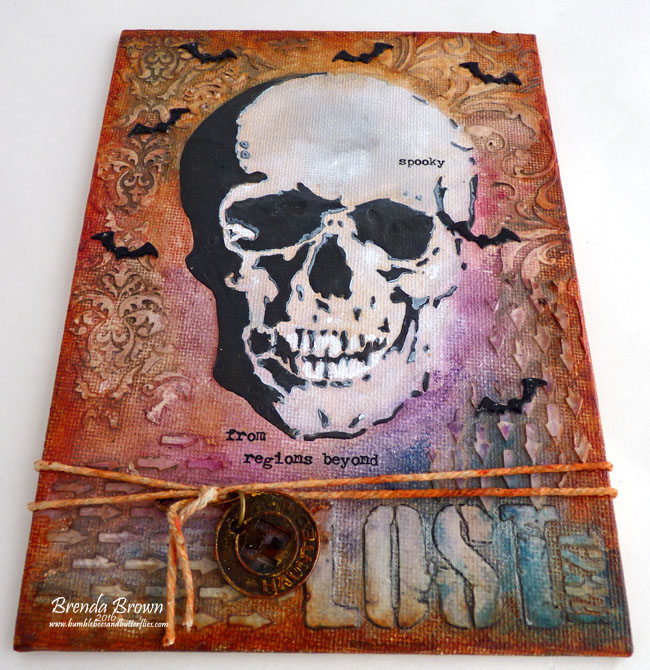 A couple of Tim's Halloween remnant rubs and it's finished. It's not quite how I imagined it to be but I am still happy with the overall look.

I hope you will enter any of your Halloween projects into the challenge, it would be lovely to see you over there and wait till you see what is up for AVJ on the 7th, it's definitely the month of October lol.

Thanks for stopping by and taking a peek at my make.