Today sees the start of the next ATC swap at the Stamp Man and as you can see the theme is STEAMPUNK. I have to say I voted for this theme having never really experimented with the genre but I was so up for having a go.

Wikipedia says
"Steampunk is a sub-genre of science fiction, alternate history, and speculative fiction that came into prominence during the 1980s and early 1990s. Specifically, steampunk involves an era or world where steam power is still widely used - usually the 19th century and often Victorian era Britain - that incorporates prominent elements of either science fiction or fantasy. Works of steampunk often feature anachronistic technology or futuristic innovations as Victorians may have envisioned them; in other words, based on a Victorian perspective on fashion, culture, architectural style, art, etc. This technology may include such fictional machines as those found in the works of H. G. Wells and Jules Verne or real technologies like the computer but developed earlier in an alternate history." 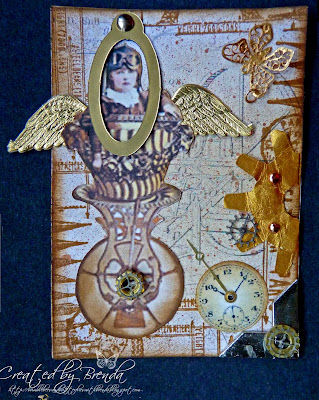 I loved playing with this. I made my own background paper by making up a collage of steampunk drawings downloaded from the internet. I sprayed it with a cosmic shimmer mist, then stamped round the edges. I then downloaded a steampunk image, die cut some cogs and found bits of hardware and a watch face to add to it.

Another new style for me. Loving it.

Have fun with whatever you are doing and I look forward to seeing some steampunk from you.

I bought a couple of new Stampotique stamps the other week and finally got to use them over the weekend.

The current theme at the Stampotique challenge blog is to use turquoise and orange. This is another card that I actually started a few days ago, but only got finished last night. I decided to use the Sketch Saturday layout which actually proved more difficult than anticipated, but became a brilliant challenge. Everything on this card, except the backing paper and the metal clip, has had a coating of gesso, in fact I seem to have gone gesso mad. 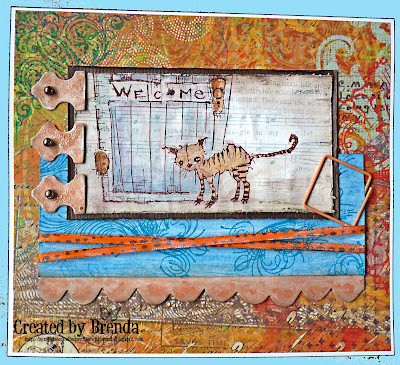 The door and the cat are two separate stamps and I started by making a background of text and music papers gluing them as a collage and then covering them with a wash of ....... guess what? Yes gesso. I cut a mask for the cat and stamped the door to place it behind him (has to be a 'him' because I have 2 male cats), then painted with DIs. The turquoise layer was over printed with a TH stamp and the ribbon given..... yes you've guessed it - a coating of gesso. Finished off with some hinges painted and covered in rock candy crackle paint and little beads in the middle. The backing paper is from a pad with no name (lost the front cover...), all I did to that was stamp a corner flourish in turquoise but it looks rather green. 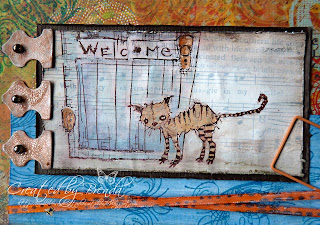 Love this little cat.    Have a great day.