I have been bitten by the bug. I have totally fallen in love with the little Frozen Charlotte Dolls. Tim Holtz calls them Fractured Dolls. I have used a couple lately, made by myself from a mould - but guess what????

I have been and bought myself some real ones, all the way from Germany where they have been dug up from the grounds of an old factory - you can see some still have dirt on them. Aren't they amazing? 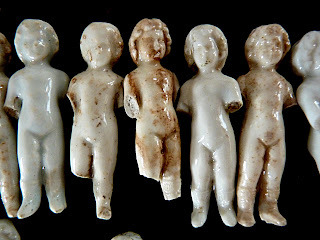 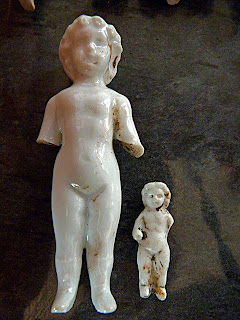 Frozen Charlotte is a name used to describe a specific form of china doll made from ca. 1850 to ca. 1920. The name comes from the American folk ballad Fair Charlotte, which tells of a young girl called Charlotte who refused to wrap up warmly to go on a sleigh ride and froze to death during the journey.

The Frozen Charlotte doll is made in the form of a standing, naked figure moulded all in one piece. These dolls may also be seen described as pillar dolls, solid chinas or bathing babies. The dolls ranged in size from under an inch to 18 inches plus. The smallest dolls were sometimes used as charms in Christmas puddings. Smaller sizes were very popular for putting in doll's houses. Occasionally versions are seen with a glazed china front and an unglazed stoneware back. This enabled the doll to float on its back when placed in a bath.
They are also made in bisque, and can come in white, pink-tinted, or, more rarely, painted black. Some rare examples have moulded chemises. Male dolls (identified by their boyish hairstyles) are called Frozen Charlies.

Other places describe the dolls being used by ladies to stir and cool their hot tea and after they would be given to little girls to play with. Some historical articles say they are called 'frozen' because they are unjointed, with no moving parts to them.

So there is a real history to these little things. Of course the painted and unbroken ones are worth quite alot of money but these ones have not been sold before and would have been thrown away at the factory, so probably were classed as seconds, but even so I think the fact that they are broken adds to their character. (My husband thinks I am mad!!!)

I have also purchased some vintage pen nibs and I am waiting for some little glass bottles to arrive - I think my altered art is going to increase don't you.

Hope you are having a good day. I will be back later with another wedding book page.

these are fab!! cant wait to see what you do with them ..... and thank you for the lovely comments on my blog! Hugs Juls

Amazing little dolls! Excited to see what you create my dear! Have a lovely day!

Hi
What a find.
There is no comparison, the German Frozen Charlottes are much more desirable in their authenticity.
Wishes.
Lynne

Wow these are amazing Brenda what an awesome find! hugs rebekah xx

oh Brenda .. they spook me a little bit.. i ma a scaredy cat lol
Lisa x

Wonderful dolls. Funny I just bought my first one recently too. Ill have to make a mold of her too. I just love her and dont want to use her. LOL. cant wait to see what u make. take care, gerri

hmm. those dolls.
a friend mailed me a little doll like that and i had no clue what i was to do with it. But now at least i know what they are referred to as :)
xx,
amy

I loved reading the history behind these dolls and look forward to seeing what you make with them.

Love these dolls Brenda thanks for sharing the history of them makes them even more charming. look forward to seeing what you do with them. hugs x

I love the history behind these dolls and you have been so lucky to track down such beauties,

These are gorgeous, what a find!!!!